Galaxy Pegasus W105R2F or Galaxy Pegasis W105R²F (ギャラクシーペガシスW105R²F, Gyarakusi Pegashisu W105R²F) is an Attack Type Beyblade that appears in the anime and manga series Beyblade: Metal Masters. It is Gingka Hagane's third Beyblade in the manga, and his second in the anime, replacing Storm Pegasus 105RF and later evolving into Cosmic Pegasus F:D. It was released as a Starter on April 1, 2010 in Japan.

The Face Bolt depicts "Pegasus", the magical winged horse that soared into the heavens for the Greek god, Zeus. Pegasus is one of the 88 constellations in space. The design is almost the same as the Pegasus I motif, but has a few modifications. The head of Pegasus has lost its colour, and is now outlined in red, while the letters "P" and "S" also have a red outline and thin gaps cutting around each other.

Pegasus II is the successor to the original Pegasus I Energy Ring, and as such retains the designs of Pegasus' wings and symmetrical head design. However, the wings are now much larger and detailed, making up much of the Energy Ring's surface area. The wings also feature the letters "P E G I", short for "Pegasis". Pegasus II is also more circular than Pegasus I, and weighs 3.1 grams, one of the heaviest when it was released.

Much like Pegasis and Storm, Galaxy's main shape consists of three rounded, wing-like forms intended to depict the wings of Pegasis, and each wing has two separate protrusions. There are four indented separations on each wing, complimented by three curved ridges on the top and five small spikes on the bottom. Each of the undersides are hollow, making Galaxy very light.

Though Galaxy has a very violent appearance, in actual battle it is very restrained; it is unable to deliver a great amount of Smash even at high speeds, primarily because of its light weight and rounded protrusions. As such, Galaxy is easily outclassed by other Attack Wheels of its time and not recommended to be used competitively.

Wing 105, or W105, consists of two curved wing-like fins that slant downwards, similar to DF145. The main purpose of this Track is to push air upwards to provide extra Stamina, but the effect this Track produces is negligible, therefore it has as much competitive value as a regular 105 track. W105 should only be used in the absence of 85, 90, and 100 in both Stamina and Attack customizations.

Right Rubber Flat, shortened to R²F, is–competitively speaking–the most vital part of this Beyblade. R²F is very similar to RF, and is an overall upgraded version of it. R²F consists of six curved rubber spikes that face to the right intended predominantly for use in right-spin combos. This new design creates more traction with the stadium floor, causing it to move more quickly than its predecessor, RF. However, its stamina is decreased due to the increase in speed and friction compared to the original RF. This also means an R²F will wear down faster than an RF.

Since this is a rubber Attack Bottom, a new R²F is harder to control than a new RF, mainly because it moves much faster. This makes RF a good choice for controllability and stamina, while R²F is a better choice for speed and power. Like RF however, it is essential to wear the rubber of R²F before competitive use, as this allows the Beyblade to spin into a "flower pattern" more easily. A clear sign that shows when an R²F is in its prime is when the indented lines that form a star shape inside R²F's perimeter are nearly gone.

Throughout the course of its release, each company (Takara-Tomy, Sonokong, Hasbro) has released its own mold of R²F which revolved around the different placement of a 'bar' on the inside of the tip, (a lack thereof) which seem to be made at random.

This mold contains a thick bar in the middle of the tip, securing the Rubber of R²F.

Mold 2 has no bar in the middle, yet a space for one which in reality provides no support for the Rubber tip. This mold is known to be very shaky.

What this release provided was a quasi-barred R²F which has 2 separated bars in the middle, as usual, but are not actually connected at the center. Regardless, these bars succeed in keeping the rubber in place, unlike in Mold 2.

Use in Attack Customization

R²F can be utilized in any situation where RF would be used to increase overall speed and power. MF Blitz Unicorno CH120R²F is a great example of this; Blitz has zero Stamina, so it must always aim for a KO as quickly as possible. The additional speed and power of R²F can help to accomplish this.

It evolved in episode 52 in order to defeat Ryuga and Lightning L Drago.

Gingka did several practice attacks on rocks to test out Pegasus' new powers. Later, he was challenged by Masamune, but Pegasus could not control its powers and sent Striker flying over the horizon four times before being defeated when Unicorno pushed it into a pile of gravel. Gingka then realized he needed to work as one with Pegasus and was able to control its power into a special move.

In episode 3, It battled Thermal Lacerta and Aquario alongside Ray Striker. Although Gingka and Masamune did not work very well togehter, they were able to win the match.

In episode 7, It battled Rock Zurafa, but the battle was canceled due to Masamune launching Striker into the battle.

In episode 11, It battled Rock Giraffe, this time to a finish, in the final battle between China and Japan. Although Giraffe held off Pegasus' attack for a while with its rubber blades and Solid Iron Wall, Pegasus was able to break off one of the blades and win the battle.

In episode 13, it battled Nowaguma's Rock Orso and won despite being unable to use its Special Move. Also, Nowaguma let Gingka win.

In episode 14, It faced off against Rock Orso yet again, but instead in a cage battle specifically designed by Puten to block Gingka's Special Move. However, by using Orso's power against it, Pegasus was able to break the cage wall and defeat Orso with Star Booster Attack.

In episode 16, It battled Gravity Destroyer and both of the Grand Cetus along with Ray Unicorno and Flame Libra. Pegasus was unable to defeat the teamwork and defense of the two Ketos, and ended up being defeated by Perseus.

In episode 21, It faced off against Rock Leone in an epic battle of rivals. Pegasus was able to push Leone to the edge, but Leone in turn blocked Star Booster Attack. Gingka's determination not to lose caused the battle to end in a tie when Leone used King Lion Reverse Wind Strike.

Pegasus had another battle with Leone not long afterward, this time with Unicorno on its side and Horuseus as another opponent. It fought Rock Leone for most of the battle and ended up tying with it because Leone's Spin Track broke. However, Masamune was bale to defeat Nile, so Gan Gan Galaxy won the match.

It battled Gravity Destroyer in Episode 29, and the fight was going either way when Pegasus broke free of Destroyer's Eyes of Medusa, but its StarBooster Attack was knocked down by Black Excalibur. However, Gingka was able to win by creating a new Special Move, Stardust Driver.

In the knockout battle between Gan Gan Galaxy and Team Garcia, it battled Ray Gasher first, but all of its attacks were dodged in an attempt to wear down Pegasus' power. Selen eventually forfeited the battle so her brother could take her place. Pegasus then faced Cyclone Herculeo in the Cyclone Stadium, where Herculeo would launch devestating Cyclone Attacks using the Cyclone Point. However, Gingka figured out how to counter this technique and destroyed the Cyclone Point to win the battle. While he was still celebrating his victory over Ian, Pegasus was defeated by Ray Gil.

Galaxy Pegasus was released in Wave 4. It is an attack type Beyblade. In spite of being released with all of the other legend Beyblades, it itself is not a legend.

The only notable part of this Beyblade–R²F–more than makes up for the other lackluster and outclassed parts. It is essentially an upgraded version of RF in terms of speed and power, and considered to be better for most situations. Because R²F tends to wear down over time, every Blader should own multiples of this Beyblade. 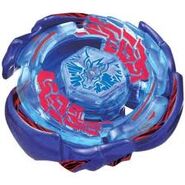 Galaxy Pegasus as a toy 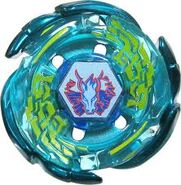 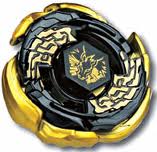 Galaxy Pegasus on a title screen 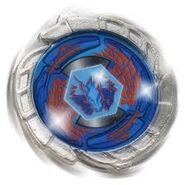 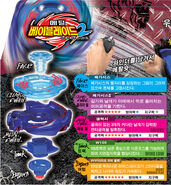 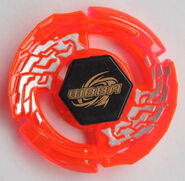 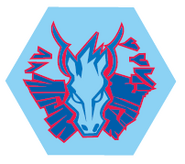